Please enable JavaScript to use this site.
This event has already passed.

What can we do to fix corruption in South Carolina?

More than 120 public officials on the Palmetto State have been arrested on criminal offenses in the past six years. And The Post and Courier's Uncovered investigation has exposed many more instance of questionable conduct.

Join us for a panel discussion of our continuing Uncovered series, which seeks to shine new light on questionable government conduct in South Carolina, especially in smaller towns where officials often receive less scrutiny. We'll answer readers' questions, listen to tips and discuss what can be done to address this festering problem. We'll also explore the critical role local newspapers play in holding officials accountable for their actions.

Sunshine Week is March 13 through March 19 -- Support investigative work like "Uncovered" by donating to The Post and Courier Public Service and Investigative Fund. 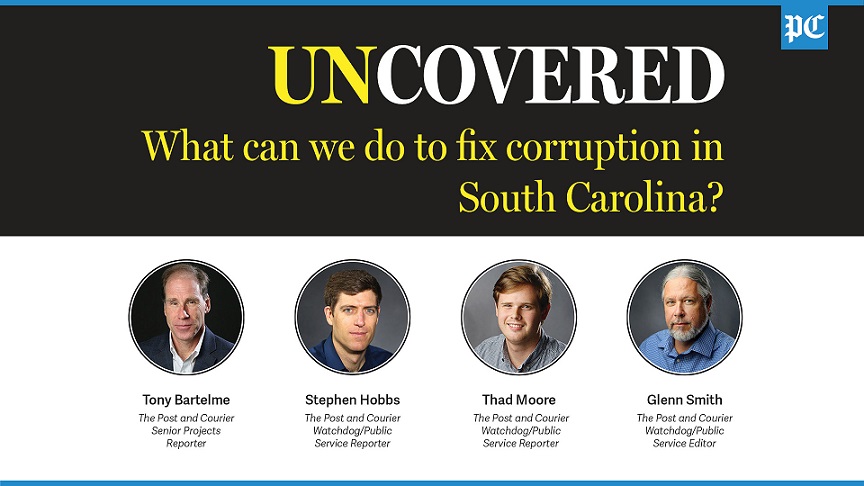 The event is free, but you must RSVP to attend.

Once registered, you will have the opportunity to submit questions.

Virtual tickets will be sent a video link a few days after the event concludes.

If you cannot attend the event, please let us know ahead of time so we can give your tickets to someone else.

Daily Headlines Newsletter
Want the latest news from Charleston and throughout South Carolina? Sign up for The Post and Courier’s Daily Headlines newsletter. Our top stories are handpicked and delivered to your inbox each morning at 6:30 a.m., plus an evening roundup at 5 p.m. every Monday-Friday.

All items are non-refundable, all sales are final.

All items are non-refundable under any circumstances.